Ever feel like the demanding duties of being a preacher’s wife don’t actually matter to anyone?

Maybe you’ve wondered lately if anyone ever notices.

If all the silent, secret sacrifices and efforts even matter.

I’m here to tell you today that it does matter.  It all matters, greatly.

You see, today I’m so very thankful for a “little” something that no one probably ever noticed…

I’m thankful for a ride to Church.

Not a ride for me, but for all those who wouldn’t have gotten there without someone else’s set of wheels. 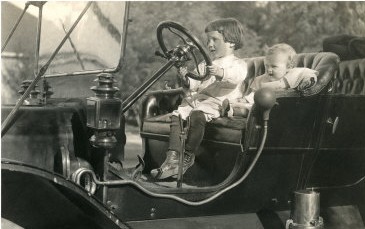 a 12-year old boy who was pestered to death by the neighbors until he finally agreed to ride with them to Church.

Friendly persistence won out, and Keith finally accepted the invitation.  Because of this, he met Christ as his Savior and ended up attending Bible college, pastoring several churches, and spent the remainder of his life on the mission field in Latin America.

a little black-headed girl, the middle of seven children whose parents ran a tavern, who rode to church every Sunday morning with friends.

Yvonne became a believer in Jesus because of those weekly rides to Church.  Her entire family eventually came to the Lord… and stopped selling liquor.

who rode the bus to Church every week until he was old enough to drive there himself.

This same boy accepted Christ at the age of thirteen, and, with the encouragement of his pastor, attended Bible college and became a preacher.

These examples may not seem very exciting or profound, but the impact of these lives have had eternal significance in my life.

You see, Keith Smith, the boy who became a pastor and missionary, was also my grandfather.  He and his wife (my grandma) raised four daughters in a Christian home, and one of their daughters is my mother.

Because someone took the time to invite an unsaved twelve-year old boy to Church, I was raised in a Christian home.

Yvonne Lenhart, the little girl whose parents sold liquor for a living, grew up, married, and also raised her four children in Church… one of her sons is my dad.

Because someone took the time to bring a shy little girl to Sunday School every week, I was raised in a Christian home.

And the little boy named Jeremy?  Well, in case you haven’t already guessed it, that little kid who grew up and became a preacher also became my husband and the father of my children.

Because someone took the time to pick up a tousled-haired little boy for Church, I am married to a godly man and my children are being raised in a Christian home.

We don’t live or die to ourselves.

Our lives can leave a huge impact on the life- and future generations- of someone else.

Something as simple as offering a ride to Church to a rowdy little neighbor kid may very well leave an impression for eternity.

Someone sees all the little (and big) things you do to bless and build and serve the kingdom of God.

And He might just be using you to change someone’s world.

… your Father who sees in secret shall reward you openly.”

An Open Letter to Young Pastor's Wives
3 Ways Every Pastor's Wife Can Get Real
Balancing Ministry and Homeschooling (for the pastor's family)
Happy New Year, Friends!

« Dealing With A Homeschooling Mom’s Biggest Critic
Sometimes I Don’t Want to Homeschool! »